A change of pace this episode. For many years i wanted to build an electric vehicle. Several things stopped me at the time, the biggest of these being money. I really wanted to build an electric car but the best I could hope for was an electric bicycle. I made a couple of attempts when I was younger but never quite managed to do it.
Fast forward to an interview with Bill Griggs of CNC Router Tip Podcast a few months ago and a question he asked about what I would like to do if I could. Eventually I remembered the Electric vehicle I never managed to build.
Check out the interview here
http://www.spreaker.com/user/billgriggs/cncrt-50-cncnutz-with-peter-passuello

My budget for the build is very small but I already have some batteries and after searching around I found some kit options. I could have bought an electric hub but that isn't my style, (or lack of).
I also want to explore the option of rear wheel vs Mid drive and an electric hub won't work for this. It seems that Mid drive is the way of the future so once I have it running in this configuration I will look to changing to Mid drive and see what the difference is. 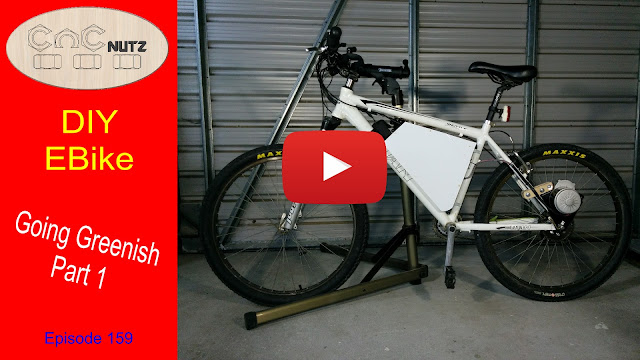 The Kit
I ended up buying a 250w kit because 300w is the maximum allowed for an electric bike in New Zealand. The kit is very cheap compared to others drive systems available and made it worth tasking the risk.
Electric bike kit I used

This video is the unboxing of the kit and showing what comes with it. I was quite surprised with some of the little extras that came with it which was very welcome and made the install easier.

I hope you find it interesting despite that there is no CNC in this video but I wanted to share the build process. There will be a little CNC in this project and will be using a new toolpath technique I haven't tried before so that will be something to look forward to.

Will it work?
Join me for the next thrilling installment.

Cheers
Peter
Posted by CNCnutz at 04:53