2 videos this week  covering how to install an RS485 adapter to your PC and tehn control your spindle. I split it into 2 seperate videos so that viewers can watch the relevant version without the distraction of irrelevant information relating to another control system. It should make viewing easier.
Whether you are intersted in Mach3 or UCCNC just watch the appropiate video for your control software. Even if you don't run these control systems watching will give an insight into what RS485 is and how it is used.

The plugin used is available from this website.
http://royaumedeole.fr/informatique/plugin-mach3-pour-vfdhuanyang/mach3-plugin-for-huanyang-vfd/

This is quite an old plugin and it should be very stable. 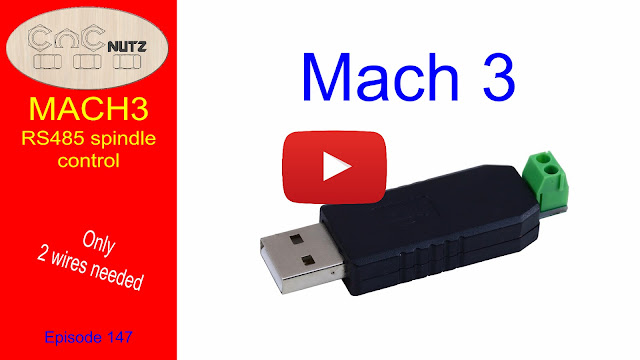 The plugin for UCCNC has been under development for a little while but the latest version was released only a few days ago. A big thank you to Dan911 for all the hard work he has put into developing this plugin and also the help he gave me in tracking down a problem with the adapter I had. (more on that below)
The development thread for the plugin can be seen here.
http://www.cnczone.com/forums/uccnc-control-software/321354-huanyang-vfd-macro-plugin.html

The actual plugin I used in this video, HY10, is located here
http://www.cnczone.com/forums/uccnc-control-software/321354-huanyang-vfd-macro-plugin-7.html#post2043538

Subscribe to the development thread for new plugin versions as they are released.


The plugin file contains a text document giving instruction on changes you needed to make to the VFD configuration as well as UCCNC. 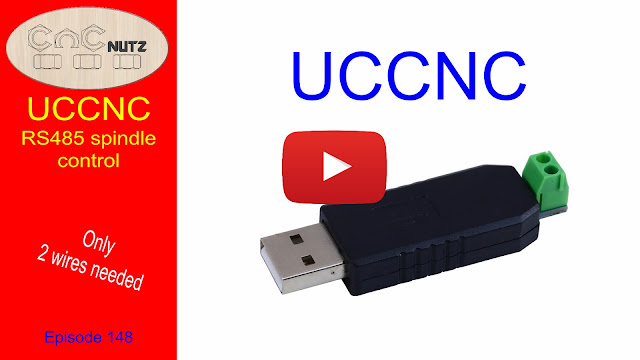 The wiring for this couldn't be simpler
It requires only 2 wires and these need to be a twisted pair. Feel free to use a screened cable but make sure there are 2 wires in the cable and use them for communication. Ground the shield at the VFD end only and do not connect the other end of the shield.

For both Mach3 and UCCNC the VFD programming was the same.
Here are the settings I changed. It is not complete programming for the VFD but simply the changes needed to bring it under RS485 control. It assumes an already working spindle

I had a bit of trouble with the first adapter I purchased with it failing to change the speed of the VFD intermittently and seemed to run slow on startup with the UCCNC plugin.

When i got the new one I opened up both RS485 adapters and I noticed 2 things about the first adapter I have purchased.
1st the metal case of the USB plug was not soldered to the circuit board. Not a problem as far as the operation of the adapter goes but mechanically it will cause premature failure of the device as it puts strain on the USB connectors pins. It also gives a clue as to the quality of the build.
2nd I noticed that the USB to serial IC is unlabeled and it is not because the name has been scratched off as is sometimes done to hide a critical IC's identity.
I suspect it is a copy of the Prolific 2303 chip and was not working correctly with the drivers.
The utility on the prolific website identified it as a PL 2303 series chip so maybe it is genuine but I find it hard to believe they wouldn't put their name on it. This IC is also a well known target of counterfiet though the Prolific drivers aren't meant to work with it at all.
The FDTI chipset maker is also a target for chipset copying and thier latest drivers won't work with a counterfiet chipset.

Both use the Max485 line driver IC for output to the VFD which converts RS232 to RS485.


I don't know if the adapter is counterfiet,faulty or something else but it may be safer to use an adapter with a CH340 chipset as these don't seem to be copied by anyone and so the drivers should work with the plugins. The prolific and Ch340 adapters look the same and cost the same so its a toss up which one to get. The Le royaume d'éole plugin documentation uses the prolific version of the adapter so either should work ok.

If you are looking for an adapter try the link below. By purchasing a product using the link provided, you help support my channel. The link will take you to search results for the RS485 adapters and you can select the type you want to use.

You are not restricted to the type or style of adapter shown here but if you are in anyway unsure of what to buy then get one that the same as shown it the video. at about $2 to $3 delivered you can't go far wrong though it is an inconvenience having to wait for it to be delivered.